Making a difference in the lives of others is not an easy journey. I’m fortunate to be a part of a family of organizations that don’t believe in giving up on dreams.

As a family member of a person with a disability, I know choosing an organization to provide person centered supports is not an easy decision nor one to be taken lightly. As a family, you want an organization of people that choose to make a difference in the life of your brother, sister, aunt, grandpa, grandmother and friend by helping them feel safe, loved and happy. 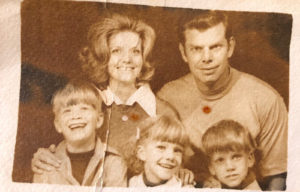 My parents’ dream of having kids and being a family was challenged in 1972. Due to a dramatic chain of events their dream of family would be threatened. A series of events began with me being in the hospital for 22 days due to pneumonia. Upon my return home our family would soon discover my brother Joe suffered from the same. For Joe, the illness would have far worse consequences. The evening I arrived home, without warning, my brother stopped breathing. Carrying him from our living room to the kitchen, my father began CPR. His body was lifeless for what seemed to be an eternity. It was as if his body was choosing not to respond my father’s efforts. Then suddenly his lungs cleared, he began breathing. After several days in the hospital he eventually stabilized and was released. However, doctors informed my parents that Joe had suffered from irreparable brain damage. Recommendations were made to have him evaluated at the Children’s Medical Center. Ultimately their professional opinion was Joe should be institutionalized at The Hissom Memorial Center.

Institutionalization meant an unnatural breakup of our family. It wasn’t as if Joe was moving out to go to college or start a career; he was going to be separated from our family under the guise of support. This could have been the end of my parent’s dream of a family. Not willing to sacrifice our ability to be and stay a family, my parents refused to follow the recommendations of professionals. During this time (early ‘70’s) my parents weren’t alone; many families had the same dream to keep their families together, but due to the needs of a child with intellectual and developmental disabilities (ID/DD), lack of resources and lack of community-based supports, the only option was institutionalization. In essence, they were being forced by circumstances beyond their control to break up their family and give up their dream. In hindsight I would say we were blessed; although my brother required more support, our family could meet his needs . I shudder thinking about the consequences had they been otherwise.

Our family, like other families, took care of each other. Soon it was time for Joe to go to school. A dream all parents expect and prepare for. While Joe’s challenges were minor, the school refused to provide him an education. Unphased, my parents once again fought to protect their dreams. They would succeed, allowing Joe to attend school just like his older brother and younger sister. My parents would find more obstacles ahead to overcome, but they never gave up. Finally, after seven years on a waiting list, Joe began receiving supports that enabled him to pursue his own dreams…his own house, a job and one day get married. He’s got the first two and is still working on the third, but I’m confident one day it will happen.

We still get together on most Sundays with my parents share dinner. Occasionally a new dream is shared or an old one resurrected, starting new journeys and commitments.

As a family, we strove to make a positive difference in Joe’s life, as Joe continued to be an important member of our family. After graduating from Northeastern State University, I took my personal experiences of supporting my brother into my professional career as I entered the the field of Intellectual and developmental disabilities as a professional. I worked as a job coach and then on the Homeward Bound Review panel, a group responsible for overseeing the lives of people who were moving from Hissom Memorial Center.

This work made me realize that my experience with my brother taught me a better way to support people. As my family expanded, I teamed up with my serial entrepreneur mother-in-law, Linda Myers, who had life long experience supporting a daughter with cerebral palsy. Initially against the backdrop of federal court judgments, on Nov. 21, 1990, our family began liberating people with intellectual and developmental disabilities from institutional settings by providing community supports with our brand new company, Bios … the Provider. With only our personal experiences as family members, we created supports that re-connected people with their families and communities. People once incarcerated against their will became valued members of society; living, working, worshipping and playing alongside their fellow citizens.

Occasionally we may question our dreams, but in the end that doesn’t stop us from trying to accomplish them. One of the most important pieces to accomplishing our dreams is having others around you that will believe in and support you. While my professional career shaped me, it was my personal experiences as a family member that serves as my cornerstone.

Some features of this site may not be available with your current browser.
In order to receieve the best experience, please update to a newer browser.