You Never Know Who You’ll Meet

I met Trey in September 2017 when I was “checking out” Orange Theory Fitness Midtown Tulsa. I was at a personal crossroads in my life.  Our family was preparing for the arrival of our first grandchild and suddenly, I started thinking about my life, my role and my example of healthy living.  I am proud to say that I am in better health today.  Much of my success is due to Trey’s training and coaching.  He encourages me and others, with “High Energy, High Results, High Five”…every time we walk into the gym and begin our cardio workout.  Quite often I hear,  “I see you Lori….good job…Good JOB!” 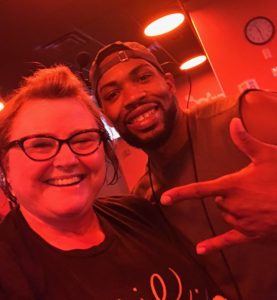 Guess what?  Trey’s and my paths have also crossed at Bios!  In small talk before one of our workout sessions, Trey suddenly remembered my name on some documentation he had seen when he worked at Bios BEFORE he came to Orange Theory Fitness.  Since that time, many of his and my conversations are about friends made at Bios and personal rewards we both have experienced from our employment with Bios…we both comment that we are better people because of Bios.

As I walked into the gym last Friday, Trey welcomed me and said, “I’m going to go see A this weekend”.  Trey provided support to Mr. A and his roommates during almost 4 years of employment with Bios while also going to college, as well.  Our conversation continued and I asked Trey if he received training on person-centered thinking while he was at Bios and he responded with an energetic “YES” and began telling me what was important to and what was important for Mr. A and who were A’s close friends and community.  Trey had nothing but good to say about Bios and their training.  But, Trey REALLY warmed my heart with what he shared next …

“As a matter of fact, I used my Bios training about 6 months ago when a few of us guys got together to play a “pick-up” game of basketball”.  One of the players ended up having a serious heart attack during the game and became unconscious.  In that very moment, Trey said, “the CPR training he received at Bios triggered the necessary action in the situation when he realized the person was not breathing”.  Trey instructed another player to call 911 and Trey began administering CPR and used the AED (Automated External Defibrillator) at the facility until paramedics arrived.

Later in the day, I could not quit thinking about Trey’s and my conversation earlier…it really brought to my mind….that Bios, and our work at Bios, IS about life.  Trey…thank you for making a difference not only in my life, but in the lives of many others and Bios THANK YOU too!

Some features of this site may not be available with your current browser.
In order to receieve the best experience, please update to a newer browser.